Described by many as the most English part of England, the south west area known as the Cotswolds really is picture postcard perfection. Tourists flock here from not only the rest of the UK but from far and wide, and is a particularly popular area for Japanese tourists. So what is it about this little piece of England with its rolling hills (Wolds), sleepy villages and and quintessential English-ness that makes it so appealing on a global scale?

the most English part of England

It isn’t all countryside in the Cotswold as some very famous cities such as Bath rise from the green and pleasant landscape. Having said that, the cities here are so beautiful you could be forgiven for not believing they are cities at all if your previous experiences of city life have been pollution laden metropoles laden with industry. Each city in the Cotswolds has its own unique charm and attractions, such as the Roman Baths in Bath for example.

There are also many well known and very picturesque towns in the area including Cheltenham, best known for its famous racing festival held here every year. There is also a selection of larger villages and towns which are renowned for their fine shopping facilities including Cirencester, Stow-on-the-Wold, Tetbury and Chipping Norton.

What you will notice as you travel around the Cotswolds is the almost magical uniformity in the area’s architecture. The warm, honey coloured limestone is much in evidence and is used for everything from traditional stone floors to roof tiles. You only have to pop into one of the plethora of thatched roofed pubs dotted around the countryside to see how important this local stone is to the very essence of the Cotswolds.

Another feature in the drystone walls used to separate the fields. Many of these date back to the 18th century and were created by craftsmen of considerable skill when you consider they are still in existence and no plaster or cement was used in their constructions.

In the fields between the walls you will see the famous Cotswold sheep. This is a classic Cotswold scene dating back to the medieval period when the wool from this area was the most highly prized and many of the finest houses and churches in the area were built by the rich merchants who wanted to leave their mark on the landscape. Known as Wool Churches, there are still plenty of these to visit and they are well worth seeing.

As well as the aforementioned Roman Baths there are many top visitor attractions in the Cotswolds for those who love to explore the area they are visiting. The Westonbirt Arboretum is 600 acres of countryside which houses over 1600 trees and boasts 17 miles of pathway for you to wander through one of natures wonders. The Cotswolds is also home to Blenheim Palace, one of the most famous stately homes in Europe.

There is a fine choice of accommodation available to Cotswold visitors from city hotels to wonderful country cottages to luxury properties to rent. The latter is very much favoured by those who want to get out and about exploring due to the freedom it affords.

As the Cotswolds is also a recognised agricultural area known for its own special produce including fine cheese, meat, fish, beer, wines, fruits and vegetables you will never be struggling for somewhere to enjoy a tasty meal. With a range of eateries from pub lunches to a la carte restaurants the Cotswolds can be described as a real gastronomic delight.

Where Do Celebrities Live In The Cotswolds? – Updated 2021

Update: We have added some new celebrities who now also live in the Co 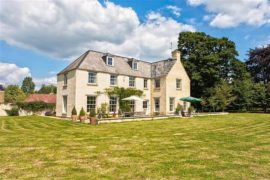 It’s not often a property is available to rent in Holwell, mainl